Any traumatic incident, such as abuse, accident or abandonment can lead to behavioural or physical problems. Trauma causes the ‘electric circuits’ of the body to turn off momentarily, this can cause a blockage in the flow of energy which later leads to disease. Sometimes the problem is clearly connected, such as a dog who always barks at men after being scared, intentionally or unintentionally, by a man. But often I see animals who have a physical problem, that arises from the internalisation of the trauma. For example digestive problems. Or I see behavioural issues that arise from being protective of an area that was once hurt.

Once we pin-point the underlying cause (the original trauma) , we can offer the aromatics that will help the problem clear, by addressing the roots, rather than the symptoms. Essential oils can move the blockage and jump start the system, clearing health and behaviour problems as if by magic. Here are a couple of ‘real life stories’ to illustrate how effective essential oils can be in these cases.

Benzoin, for trauma held in the body

Among other things, benzoin (Benzoin styrax) clears emotional trauma held around scars. One of the first times I used benzoin was with a horse who had run into a barbed wire fence some years before, leading to 34 stitches along his torso. Although he had recovered physically, he seemed unable to reconnect with the injured area, where the scar ran along his side. Anything that caused him to think about this area such as being groomed, the rider’s leg touching his side, or turning to the right, triggered an angry reaction and he regularly bucked his rider off.

This horse’s sensitivity was so extreme that when I first stood and looked at the scar, from about 2 feet away, the horse became fidgety and tried to bite his owner. I offered the horse benzoin, which he breathed deeply, going into a slight trance, then with a few drops of diluted benzoin on my hands I ran my hands along the scar just above the skin, two or three times, clearing the aura. The horse breathed out loudly turned to look at me and touched the scar with his nose.  From then on he was happy to be handled from the right, as if there had never been a problem. And he stopped bucking.

This was a mind-blowing result for me in the early days of my career, and definitely a moment that made me a believer, but now I have so many stories of this kind it seems normal. In fact one of my students sent one in just the other day as a case study. A rescue dog whose behaviour turned 180 degrees after 2 sessions with the oils. 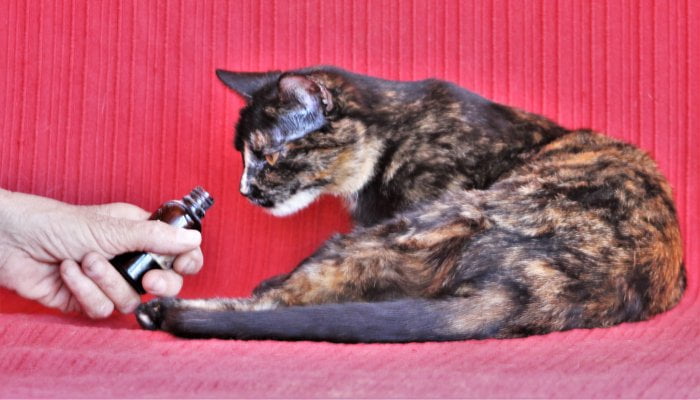 This was another heart warming moment, that confirms the simplicity and power of working with aromatics for trauma. I was giving a talk at a dog-groomers convention once. In the front row was a small dog who had come to help demonstrate how to use oils. All we could see of this dog was his nose as he hid under a chair. This dog’s person had recently died at home. He had been adopted by her friend straightaway, but he had lost confidence in himself, was very timid and scared of his surroundings.

It is difficult to do a demonstration when your subject won’t come out from under the chair, however I held the open bottle of diluted cypress (2 drop in 5 ml) in my hand at an unobtrusive distance. Slowly the dog’s head crept forward until we could see his nostrils twitching as he inhaled the oils. When the head withdrew, I closed the bottle and continued talking, despite the apparently anti-climactic demo. And then I was seriously upstaged, as suddenly the little dog appeared and walked along the front row, greeting everybody!

How to choose your essential oils for trauma

It’s not always that simple of course, especially if it has started to manifest in the body. Although even in these cases, where a traumatic incident is the original stressor, are often resolve with surprising speed. Whatever the symptoms, the protocol is the same for any session:

There are a few essential oils that help to release trauma, but without a doubt the star of the show is Yarrow (Achillea millefolium). Whenever there has been trauma, or if the animal has come from a rescue situation, I offer Yarrow. Because the trauma can sometimes feel uncomfortable as it releases, I use very high dilutions and am very tactful, never forcing or imposing, giving lots of space. I also tend to offer something emotionally calming or supportive, such as Neroli (Citrus aurantium var bigarade) or Vetiver (Vetiveria zizanoides). Or Lemon (Citrus limonum) which is a great supportive oil for trauma, as it helps to integrate new information and builds trust in self and others. It is especially good when lack of focus is an issue, or PTSD

Yarrow is not the only option. These wonderful healing allies also clear the debris of a traumatic experience, each has its own angle. Read the full descriptions in my book to decide which one to offer first: 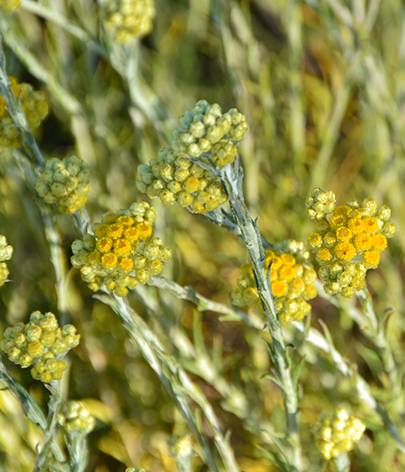 Trauma, the root of many problems

In conclusion, never discount the effects that one traumatic incident can have on an animal’s well-being.  The results of trauma can be easy to see in some animals, because it will affect their behaviour.  But some animals may take the trauma deeper into their body and may manifest as a cluster of smaller symptoms that seem mysterious or “For no reason”. In some cases it will only show up in later years, perhaps as back pain, or stiffness, or something apparently unrelated.

Whenever I take an animal’s history for a consultation I consider anything that might have contributed to the symptoms I am being asked to address. If there is any history of accident, medical interventions, abandonment or rescue I will always include one of the trauma oils as an option. It is often the key to clearing problems, and perhaps the last thing we might suspect.